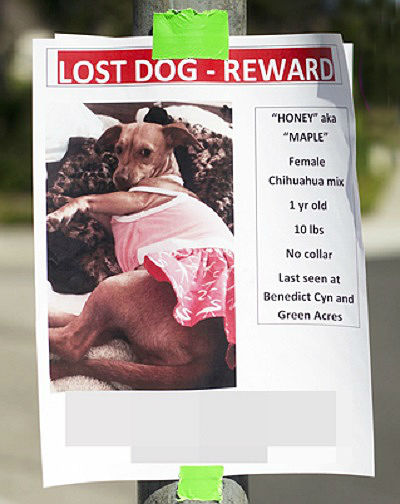 Holmes and Suri recently moved to Los Angeles from New York. To make their new house seem like a home, the pair decided to adopt a dog from a rescue located in San Fernando Valley.

Suri, accompanied by her bodyguard, selected a 1-year-old female chihuahua as her companion and named her Maple. The amber-colored pooch is also called Honey.

After having their adopted family member for just a couple of weeks, the pup reportedly escaped through the front gates of a friend's house during a swim playdate. Honey hadn't been wearing her collar because she had been swimming as well.

Holmes is offering a $1000 reward for the safe return of Honey. As many as 50 flyers were posted around the Beverly Hills neighborhood.

We are honored that Honey is wearing our Flamingo Tank Dog Dress in her "Lost Dog" poster.

The flyer says that Honey, aka Maple, was last seen at Benedict Canyon and Green Acres. She is only ten pounds and answers to both names.

What's particularly troubling is that the area Honey escaped into has pockets of wilderness around it where coyotes are known to live.

We pray for a quick reunion for Suri and her precious pup Honey.

This entry was posted by Mary.
What do you think?
New to Doggie Design?

Earn Rewards, fantastic deals and get faster checkouts! Get 50 Rewards, just for signing up!
Sign Up
Recent Articles
Recent Articles
Amazing Testimonials of the American River Ultra Choke-Free Harness
Doggie Design unites fashion with function with our top-selling safety harness!
Continue Reading >
May 4-10th is Be Kind to Animals Week!
Doggie Design loves animal fashion. Even more than that, we love animals, which is why we want to take some time to talk about Be Kind to Animals Week!
Continue Reading >
Check out these dogs dressed to the nines in our Doggie Design styles!
Enjoy these darling photos submitted by customers!
Continue Reading >